Pauline conducted the bulk of her behaviour experiments out at YIAL on her now sizeable Chinook salmon parr. Her list of near-impossible tasks included creating optimal and poor microhabitats in mini-spawning channels, creating life-like kingfisher predators, and troubleshooting in-stream antenna arrays. Sean, her invaluable field assistant, was there to help her for the month of July, and learned pit-tagging and blood sampling techniques. 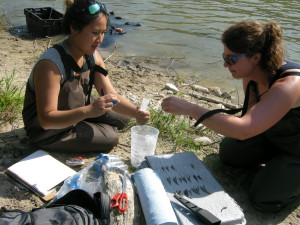 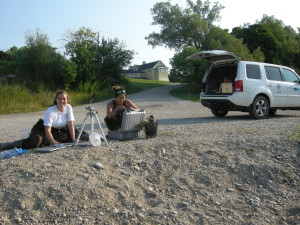 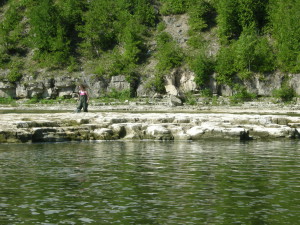 Lida, Kevyn and Jessica headed north for 5 long days of field work searching for Round gobies in the Maitland and Saugeen rivers. Plenty of gobies were found, working in some very creative field set-ups and mastering the art of floating gear through the water. Stay tuned as Lida explores more rivers with her labmates!

Jessica and Mitch scare some Chinook salmon at YIAL 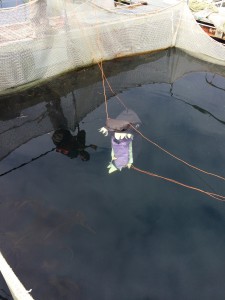 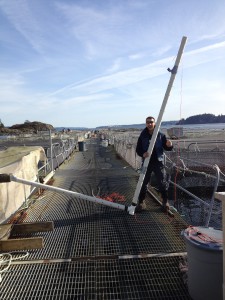 Mitch and Jessica headed out to YIAL (Yellow Island Aquaculture Limited) for May and June to collect their final data for their Masters’ projects. This involved daily video taping using 12ft tall Mitch-designed contraptions, blood sampling, and an enormous leopard seal-orca hybrid predator. A special thanks to all the SPG collaborators that are involved with the large project, and of course, John Heath and Anne Heath and all the YIAL staff!

Science Rendezvous at the University of Windsor 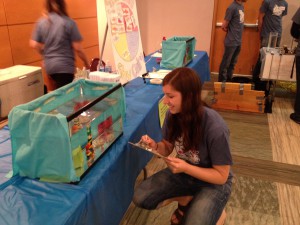 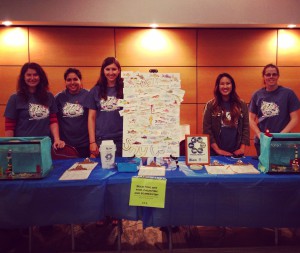 Pauline, Kevyn, Maya, Lida and Meagan ran a both at this year’s Science Rendezvous. Bold fish, shy fish, calm fish, scared fish was a huge hit with everyone. Participants completed a behavioural ethogram by watching one of several live goldfish subjects. Then, they coloured in their fish and stuck into the board to demonstrate some fish are flexible, and change their behaviour over time, while others are fixed, and exhibit only one type of behaviour consistently.