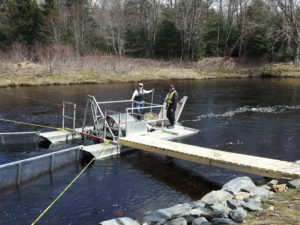 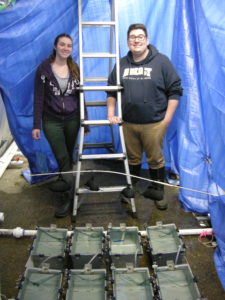 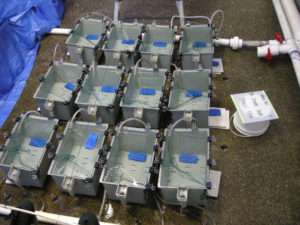 This year’s field season started off with Omar, Kevyn and Tina travelling West River, near Sheet Habour, Nova Scotia to conduct behavioural research on migrating Atlantic Salmon smolts. Two weeks later, Chelsea, Brendyn, Tina and Theresa headed to Quadra Island, BC to the YIAL hatchery to behaviourally assess triploid and diploid salmon, half of them fed probiotics, followed by brain and blood collection. Erica left for East Bay Island, Nunavut in late May, and is returning with trail camera footage from over 100 cameras, some paired with heart rate data collected via a microphone embedded in a fake egg. Success all around!

Erica is one of NSERC Science Action’s 15 finalists! 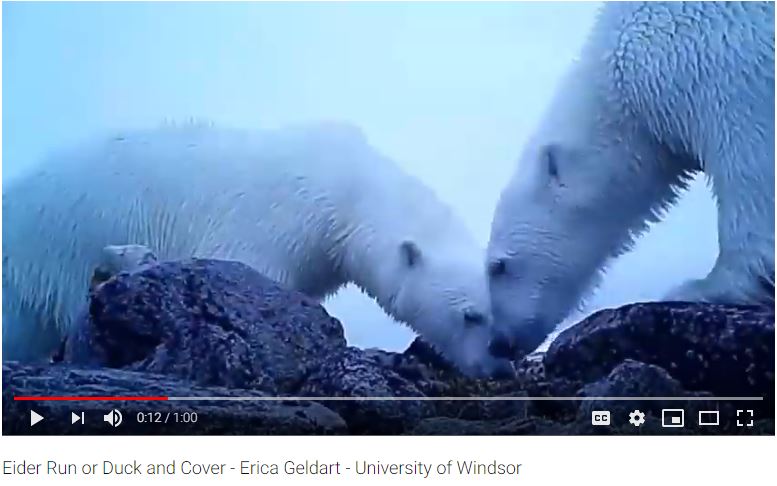 Erica’s video “Eider Run or Duck and Cover” was one of the 15 national winners in NSERC’s 2019 Science Action Competition, for which she had to summarize her research in a 60 second video in a dynamic way.

And read the article here: http://www.uwindsor.ca/dailynews/2019-05-22/science-graduate-students-win-prizes-national-research-video-competition

It was officially announced in May that Dr. Christina Semeniuk is one of 28 UWindsor researchers awarded nearly $4.4 million in federal funding to advance discoveries in science and engineering.

You can read the full article here: http://www.uwindsor.ca/dailynews/2019-05-24/grants-support-research-discovery

Tina will be using this funding to continue examining how species cope with environmental change. Her award included a $20,000 Northern Supplemental Grant for advancing science in the Canadian Arctic.

A big congratulations to Tina, who was awarded a prestigious Early Researcher Award. This award will be used to fund a new cohort of HQP (high quality personnel) including undergraduate and graduate students, post-docs, research associates and technicians in their studies examining animal behaviour in response to novel environmental stressors.

Check out the full story here.

Patrick Jagielski created a most amazing one minute video of his research studying predator-prey interactions between polar bears and eider ducks in the Canadian Arctic for NSERC’s Science Action video contest.

Patrick’s video made the top 75 finalists, and is being hosted on NSERC’s website and YouTube channel for public voting from February 6th to March 2nd, 2018.

The 25 videos with the most views at the end of this period will proceed to the judges’ panel where the final 15 prize winners will be decided.

Patrick and Cody present their research at Arctic Change 2017 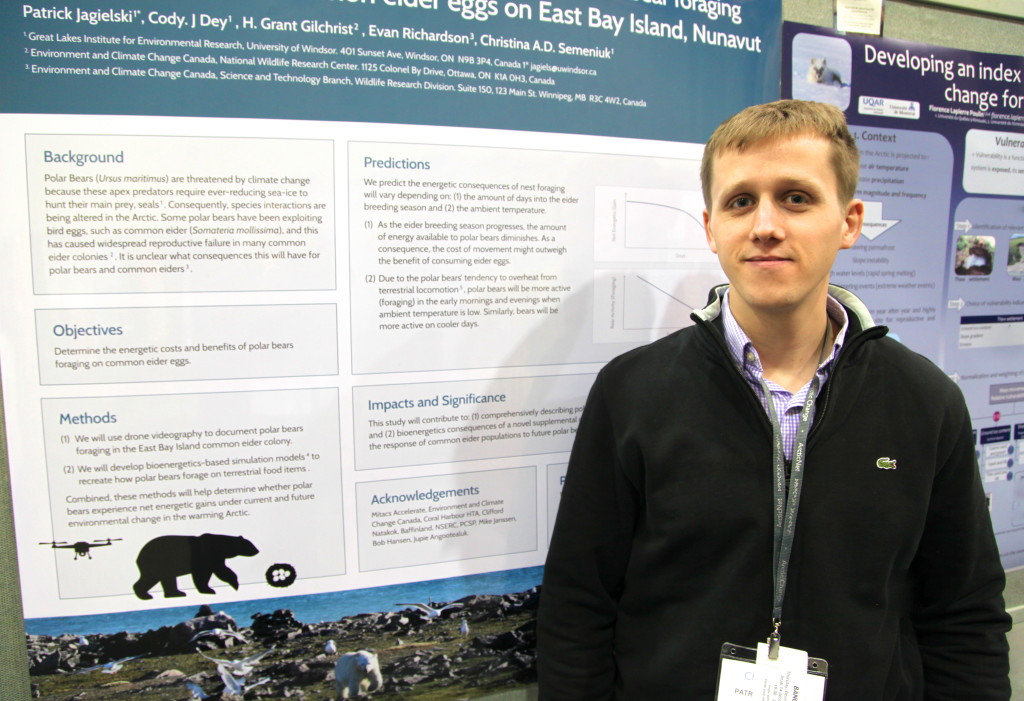 Patrick and his poster at Arctic Change 2017 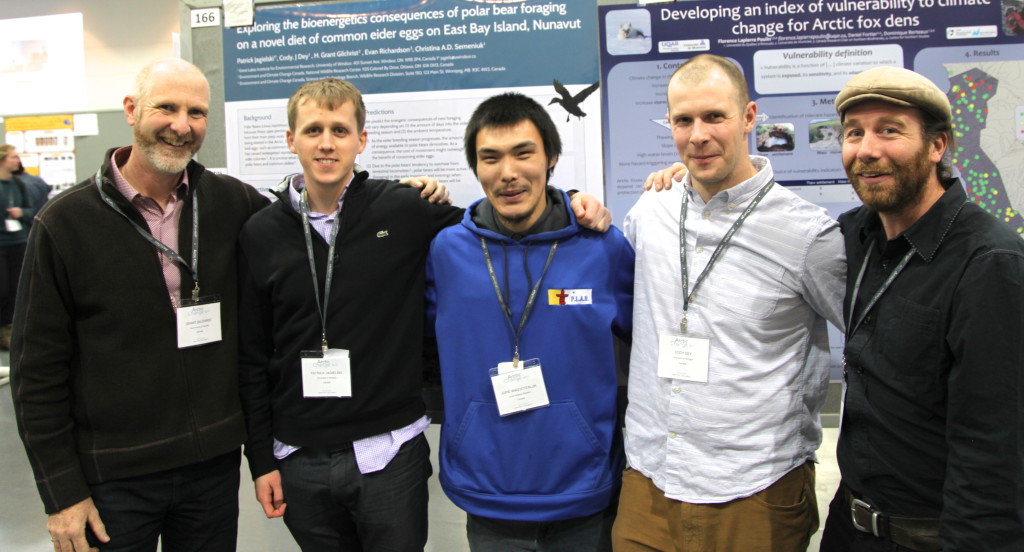 Patrick and Cody travelled to Quebec City last week to present their research at the Arctic Change 2017 conference. They were able to meet multiple researchers and collaborators that work in Arctic ecosystems. Patrick and Cody both presented work on polar bear foraging and eider nesting dynamics.

The Semeniuk lab builds a shed!

82 pages of instructions, 2.5 days, 5 people, and approximately 5000 pieces later the shed is completed! Yay Lida, Kevyn, Theresa, Colin, and Patrick! Now we just need to find out which labs at GLIER were betting against us…..

Congratulations to Taylor who earned third place in the ecology section at the University of Windsor’s Biology colloquium! She was able to describe her data amalgamation and GIS modelling techniques perfectly, and found significant differences between the seven rivers in British Columbia that were the focus of an NSERC SPG project. 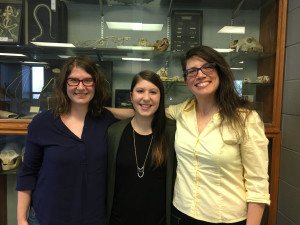 The Semeniuk Lab presents at CCFFR 2017 in Montreal 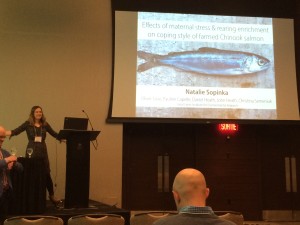 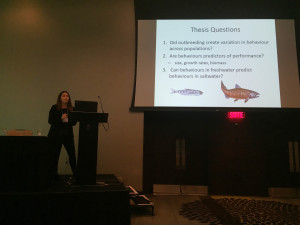 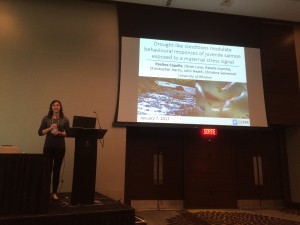 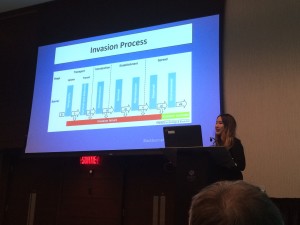 Lida, Jessica, Natalie, Pauline, along with Tina, all presented their work at the Canadian Conference for Fisheries Research (CCFFR) in Montreal, January 5-8th, 2017. Theresa and Kevyn both contributed to the poster session. The conference was full of amazing talks, and everyone had the chance to meet with past, present, and future colleagues and collaborators! #CCFFR2017

A big congratulations to Cody Dey, whose paper “Increasing nest predation will be insufficient to maintain polar bear body condition in the face of sea-ice loss” was recently accepted to Global Change Biology. 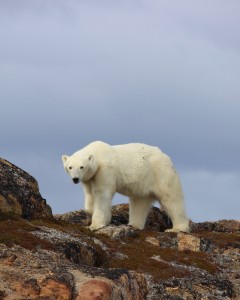 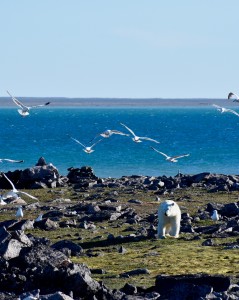 Read the full press release is below:

Arctic sea ice is melting earlier than ever, and this is causing changes in the diet of polar bears, concludes a recent study in the journal Global Change Biology.

New research from scientists at the University of Windsor, and Environment and Climate Change Canada, has shown that polar bears are feasting on the eggs of seabirds, rather than their preferred food, seals, once the sea ice has melted each spring.

“Historically, polar bears would use ice as a platform to hunt seal pups during the spring, but now that sea ice break-up is occurring so much earlier, they are forced ashore onto areas where seabirds are nesting” says Dey, a postdoctoral researcher at the Great Lakes Institute for Environmental Research, and lead author of the study. “As a result, polar bears are eating thousands of seabird nests each year, and the number is increasing as climate warming progresses.”

One of the seabirds that is most affected is the common eider. This large duck nests in groups on small Arctic islands, and has no defense if a polar bear shows up in their colony for a snack.

To study the interaction between polar bears and common eiders, Dey travelled to Baffin Island and worked with local Inuit from the community of Cape Dorset.

“Inuit are very in tune to this type of environmental change because they hunt eiders for meat, and collect eggs and down from their nests” Dey says. “Our research suggests that eiders might nest in different locations to avoid bear predation, which could make it harder for local people to harvest eiders”.

To further understand the relationship between polar bears and common eiders, Dey used data from his field studies to build computer simulation models. These model predict that polar bear predation of eider nests will continue to increase over the next 25 years, and that a large percentage of eider nests will be consumed by polar bears in years with earlier sea ice melt.

The models also predict that polar bears will get skinnier over time, even though they are eating more eider eggs.

“When the sea ice is melted polar bears are forced to fast until it freezes up again. Even if bears are eating eider eggs they probably can’t meet their caloric demand because eider eggs are relatively low in calories (compared to seals),” Dey says. “Our models suggest that polar bears can’t compensate for the loss of ice-based hunting opportunities by consuming eider eggs.”

Dey plans to extend this research by investigating how polar bear predation will affect common eider populations: “Some eider colonies are being decimated year after year by polar bears. This will clearly have some consequences for the eiders, but we don’t know the exact effects yet.”